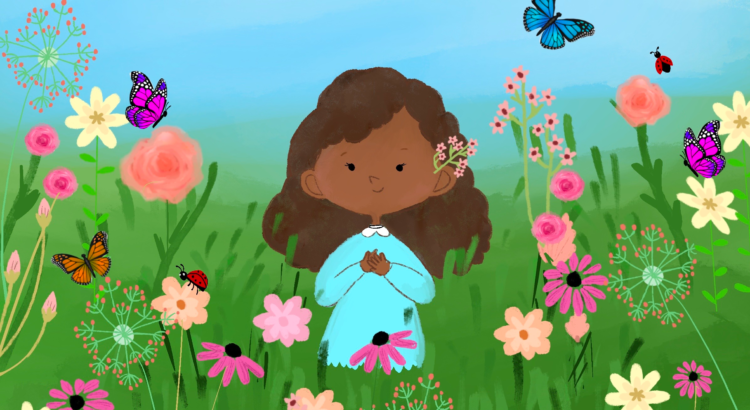 Enjoying the marvelous garden. It was a beautiful morning, and the sun was making the leaves on the trees
look very pretty. Jenny was running among the flowers in the beautiful garden of her school.
All her classmates were playing hide and seek or chatting quietly, but Jenny was having fun with the flowers. “What are you doing, Jenny?” asked Rob, one of her friends. “I’m enjoying the flowers,” Jenny told him with a huge smile on her face. “That looks a little boring. Why don’t you come and play with us? You don’t
mind being here alone?” the boy asked her. “I’m not alone. I’m surrounded by beautiful plants and lots of insects.

Can’t you see them? Look, there’s a beautiful butterfly over there. Oh, and there’s a ladybug over here!” Jenny said. “Whatever. That doesn’t sound fun to me,” said Rob, and then he walked away
from the garden. Jenny didn’t pay much attention to him and continued to enjoy the place. It
wasn’t the first time someone had asked her why she did that. She didn’t know how to explain how much she enjoyed being in a garden.

one, like the one she had seen at her aunt and uncle’s apartments. Either way, what Jenny enjoyed the most was the color and smell of the
flowers, as well as the many insects she could find there. Just then, the bell rang, and all the children returned to their classrooms.
Jenny said goodbye to the garden and ran to join her classmates. Jenny was a good student. She always got good grades, which made her and
her parents very happy. Jenny loved her parents. They gave her lots of love and affection every day. When she got home, her parents were waiting for her at the door, so she ran
and gave them both a big hug. “Hello, honey! It’s good to have you back,” said Mary, her mother. “Hi, Mommy! I missed you so much!” exclaimed Jenny. “That’s why we love you,” said Adam, her father. “I love you guys too!” Jenny said.

Then they went inside, and at once, Mary started making lunch. Jenny went
up to her room and lay down for a moment. Her room was full of pictures of flowers and animals. They were all very colorful. There was green everywhere.

From her bedroom window, Jenny could see the garden of her house, so at
that moment, she walked over to the window and looked down. The breeze moved the beautiful bushes and made the flowers her mom had planted look like they were waving at her. A while later, Jenny came down for lunch, and they all enjoyed a good meal
and some good family time. When Jenny finished, she decided to go out into the garden for a while. Her
mother also came out and sat under the shade of one of the trees there. She watched as her daughter approached the flowers and studied them all with great attention. Jenny enjoyed the details in each flower.

She noticed how different every shape, texture, and smell was, and she could feel the life in all of them. No matter how long she stayed there, she always enjoyed it.

Each petal was interesting, each shade of color had its own personality, and
each leaf had its own function. Some insects would land on the flowers, and Jenny would try not to move so they wouldn’t flee. It was fun for Jenny to watch the bees covering their little bodies with pollen
from the flowers. She would try to follow them as they left, but they would all fly away, making Jenny wonder where they went.

Vita and the Great Big Roar

Babi and the Nightmare Knight

Vita and the Great Big Roar

Babi and the Nightmare Knight